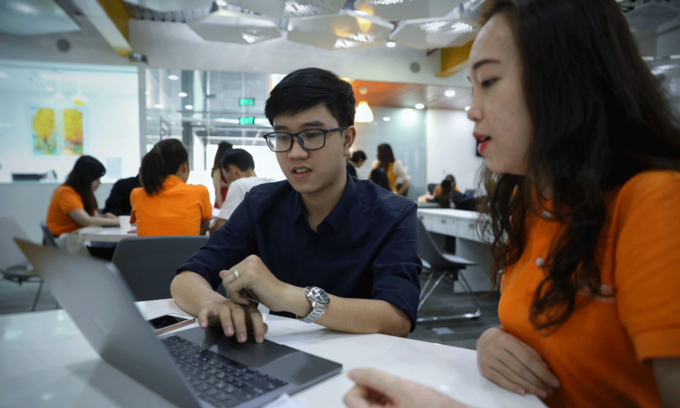 Le Van Thai, 24, of Hanoi opened his first ever trading account in March this year when stock markets collapsed amid the global Covid-19 outbreak.

“I saw the market slump as an opportunity to bottom fish for stocks with good historical growth and wait for them to recover,” he said.

He has a monthly income of VND11 million ($475), and initially invested only VND1 million as he sought to learn about trading and did not expect to make profits.

He saw the stock market as an investment channel with higher potential than bank deposits which offer 6-7 percent interest.

“Even though I have limited investing knowledge, I expect my portfolio to grow at least 20 percent a year.”

Like him, Nguyen Quoc Bao, 25, began to monitor the market and trade in the second quarter when the market started to recover as the government was able to contain the first wave of Covid-19 with an efficient social distancing campaign in April.

Bao, who is in his first year at a job in a brokerage, has bought banking stocks and is monitoring retail and aviation that are impacted hugely by the pandemic.

“I expect investments to make returns of 8-15 percent in three to six months, higher than current bank deposit rates.”

The two are among 231,400 new investors who have opened trading accounts in the first eight months, a year-on-year increase of 10 percent, taking the total number to 2.56 million, according to the Vietnam Securities Depository (VSD).

Money deposited with the 40 largest securities companies in the first half of this year nearly doubled from the previous half to VND31 trillion ($1.3 billion), according to brokerage KIS Vietnam.

Industry insiders think the impact of the pandemic on jobs and incomes have caused many people to consider stocks as a new asset class for investment.

In the first six months of this year nearly 31 million people lost jobs or saw their incomes drop as Vietnam’s GDP growth fell to a 10-year low of 1.8 percent.

He added that though gold prices repeatedly hit new peaks in the second and third quarters, Vietnam does not have a gold-trading market, and so trading is done unofficially with a high element of risk attached.

Stocks are therefore an attractive asset class, he said.

In April as the valuation of shares fell to 60 percent below book value, new investors saw this as an opportunity to make money, he explained.

This resulted in over 36,600 new trading accounts being opened in April alone, the highest monthly rate since the VN-Index climbed to a peak of over 1,200 points in 2018, according to VSD data.

Duy Tung, an asset management executive at a securities firm in Hanoi, said increasing unemployment and key sectors being crippled in the second quarter have caused a large amount of money to flow into the stock markets in Vietnam just like in the U.S. and Europe.

More new investors are likely to enter the stock market since bank deposit rates remain low and could continue that way next year, he said.

Vietnam’s economy is set to grow this year, a rare bright spot in Southeast Asia where some economies are contracting, which would attract new cash flows from foreign funds that could keep the market up, he said.

While the entry of new investors would not have any major long-term impacts on the market, a move from safe asset classes to riskier ones like securities could change people’s view of them as tantamount to gambling and help them see stocks as investment.

Minh said new investors are easily influenced by rumors and often trade with a herd mentality, which could cause losses.

He said since April “everybody has been winning” because the market is recovering, but when the market stops growing, new investors need to learn to use analytical tools to hedge risks.